The CNC Readers Choice Awards 2013 Contest is on and Dover Rug & Home is honored to be nominated!

-Now they need your vote-

Online voting is underway now through February 13th for the CNC Readers Choice Awards. Dover Rug & Home has won this award many times in the past and with your support can go for number 11!

The recipient of the “Best of Boston Home 2011” award, Dover Rug & Home has been designing, weaving and importing fine, hand-knotted rugs and carpeting from around the world for three generations. From its humble beginnings in a small showroom in Dover, MA to its new state-of-the-art 36,000 square foot showroom and Squash & Fitness facility in Natick, MA, Dover Rug & Home offers the finest rugs, carpets and flooring options in New England. Additionally, the company provides repair and restoration services, cleaning, installation, free pick-up and delivery, a life-time trade-in guarantee on all hand-knotted rugs and in-home rug trial with no obligation to purchase.

If you can vote for Dover Rug & Home as ‘Best Carpet/Flooring Store’ – please click below and you will be directed to the voting page. Thank you in advance for your support! 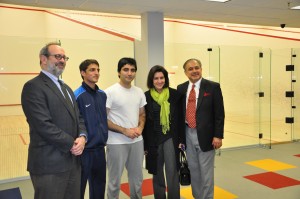 On Monday, January 14th, Mahmud Jafri, owner of Dover Squash and Fitness Center and CEO of Dover Rug & Home, and Barry Hoffman, Consul General of Pakistan, had the honor of hosting a special reception for the Pakistan National Squash Team at Dover Squash & Fitness. The event was filled with great excitement as guests met and talked with the individual players about their upcoming United States tournament circuit tour. “I am very excited to have the players train at the club and am looking forward to working with them,” says Paul Mathieson, Head Squash Professional & Director of Dover Squash and Fitness. In addition to celebrating the team, this event introduced a new program, spearheaded by Mr. Jafri and the Pakistan Squash Federation (PSF) where several Pakistani players in their teens or early 20’s are given the opportunity to compete in the United States for several months a year. The intent of this program is to give international exposure and tournament experience to these young players. Although Pakistan was a world leader in squash in the 1950′s through the 1990’s, political instability has increasingly discouraged the country’s players from competing at the international level. 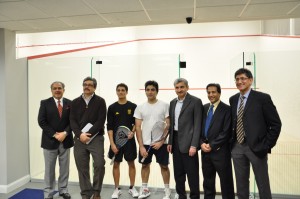 Squash Team with Board of Advisors

For more information on these efforts or to make a donation, please click contact Mahmud Jafri of Dover Squash & Fitness at 508-651-3500 or msjafri@doverrug.com.